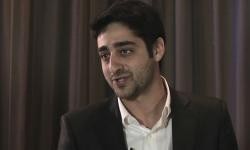 Wibbitz provides a solution that takes this news content and turns it into an easily-consumable video clips.  On a panel at the Beet.TV executive retreat last month, Dayan sat down with Jason Pontin of MIT’s Technology Review to speak about how the Wibbitz platform works.

"At Wibbitz we’ve created a technology that can automatically turn almost any text-based article on the web into a video summary in just a few seconds," says Dayan.  "It’s all machine-generated," pulling entire text articles, summarizing and analyzing them and creating a video automatically that "captures the essence of the text" and portrays it in a visual way.

While the Tel Aviv-based start-up offers a "fine-tuning" tool, to allow publishers to make slight modifications within videos, the company prides itself on being able to create video content automatically.  Dayan explains, "What would normally take at least four people putting in ten man hours” is created in seconds, “enabling publishers to create video content at scale that can be efficiently monetized and is very cost-effective for them to create."