For The NBCUniversal Local Stations, Shift To Impressions Would Help Unify Platforms 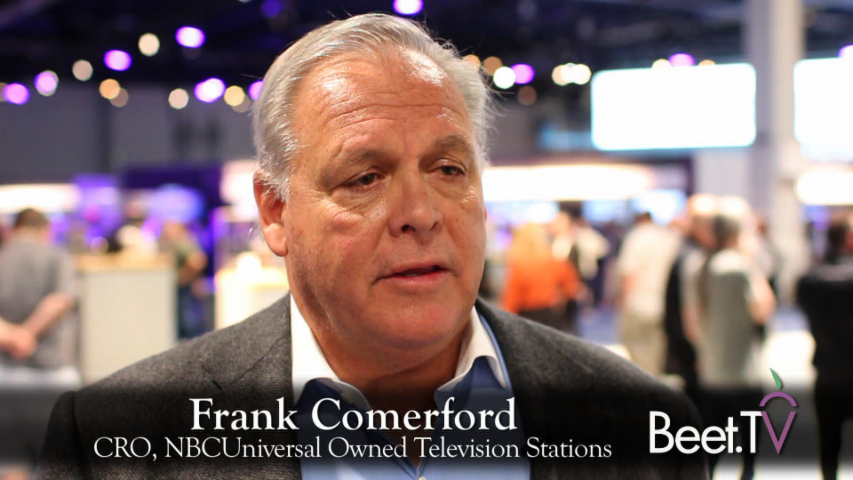 LAS VEGAS – Amid the wave of technological change sweeping the television industry, the NBCUniversal local stations believe that a measurement change to impression-based from cost based on ratings points for local TV would enable it to better unify content across platforms.

“Media everywhere except for local TV and local radio is measured in impressions and not in cost per points,” Frank Comerford, CRO of NBCUniversal Owned Television Stations, says in an interview with Beet.TV. “In network television they sell impressions across a bundle. It would help us to sew all these platforms together if we got into that model.”

The past five years has brought organizational changes to NBCU, the end result of which is several sales channels, including a transactional spot business, a specialty group for sports sales and consultative sales units. The overarching goal is to make it as easy as possible to deal with advertisers and agencies.

Regardless of whether viewers watch, say, The Black List on first-run TV, in a full-episode player later on or on video on demand, “We want to be able to cume all those impressions and let the advertiser enjoy the benefits of all those different platforms,” Comerford says.

Maintaining value is a key consideration regardless of where content is consumed. “We are not a commodity,” says Comerford. “Our inventory is in really expensive but high-quality video and it’s not worth the same CPM as maybe user-generated content or some of the other long-tail video products out there.”

Alluding to “measurement issues,” NBCU wants companies like comScore, Rentrak and Nielsen to provide “real accurate measurement for different platforms because the days of just ratings of live viewing doesn’t capture all the audience that we reach,” Comerford says.

He notes that NBCU as a network has begun to offer a partial programmatic solution to buying its ad inventory on the fly but programmatic for local remains a work in progress. It will be awhile, according to Comerford, before there is a single solution.

“Unless you have some scale you can have all the stations in a particular market and a couple of the big holding companies using it but you’re going to have a lot of piecemeal solutions,” Comerford says.

Beet.TV interviewed Comerford as part of our series on the need for standards around premium video advertising. The series was produced around the NAB Digital Summit in Las Vegas. This series on Beet.TV is sponsored by the NAB.