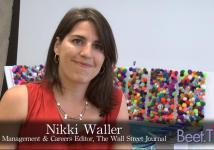 BOSTON — Taboola, the New York/Tel Aviv-based video recommendation platform for publishers has raised a new round of $10 million, the company announced this morning.

The Series C Round was led by New York-based Marker LLC. Also participating in the funding were existing investors, including Evergreen Venture Partners and WGI Group.

Taboola drives video views for publishers by creating a "strip" of a series of thumbnails which are placed on pages adjacent to a video player or placed on non-text pages.  The videos are selected by topic and the preference of the viewer of the specific page.

Taboola is integrated on Beet.TV and we have commercial relationship with the company.

CEO Adam Singolda is in Boston at the Brigthcove globlal customer conference where he is a speaker.   Taboola is a partner with Brightcove.

Earlier this month, I had the opportunity to inteview founder Singolda on stage of a Beet.TV video journalism at the New York offices of MSNBC.com.   We discussed the importance of discovery for video producers.   We have republished that interview today.