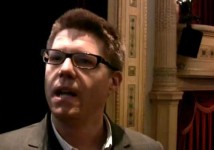 How far has the online video business expanded beyond its entertainment roots? So far that the secretary general of NATO is keeping a video blog to stay connected with member countries…

In addition to NATO, Kyte has landed a number of new enterprise and brand clients in recent months as part of the company's push beyond entertainment, Hall said. Marketers using Kyte include Monster Energy and Armani Exchange.

Kyte's been known for powering Web and mobile video for entertainment companies and still counts Universal Music Group and Sony as music clients, along with newer customers like ABC, ESPN, and VH1 on the video side. Earlier this month, Kyte announced its technology is powering mobile efforts for VH1's "Hip Hop Awards."

Like many platform companies, Kyte has been actively growing its partnerships with brands and corporate clients. Video platform companies like Brightcove and thePlatform have also been extending their businesses over the last year in part to a similar broad-based expansion strategy.

Kyte makes money via license fees for its service based on the number of streams customers are delivering. If customers also use mobile applications or integrate with ad servers, for instance, the fees may rise. While Kyte has been supporting mobile video for a few years now, the company plans to add support for Android and Nokia apps in the coming months, Hall said.

Andy interviewed Gannon at the VideNuze event last week at the Hudson Hotel in Times Square.

By Daisy Whitney on October 21, 2009 @daisywhitney