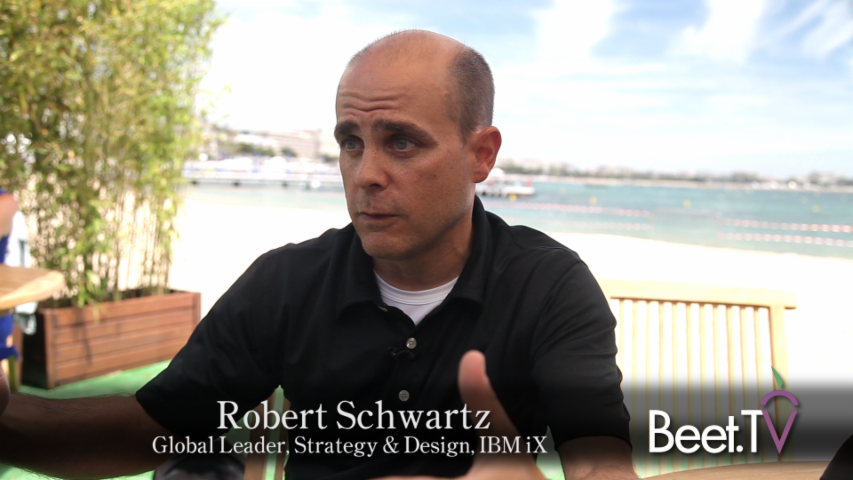 CANNES – When Canada’s Toronto Raptors basketball organization wanted to revamp the way it drafts players, it was elementary to turn to IBM. That’s because Watson helped the team analyze the social media engagement of potential draftees.

Specifically, the Raptors chose IBM iX, a unit that stands for Interactive Experience, has grown from 10 to 30 “global studios” in the past year and positions itself thusly: “We think bigger than an agency and more creatively than a consultancy.”

According to the company’s Global Leader of Strategy & Design, Robert Schwartz, IBM iX sits in the tension zone between the boundless resources available to creative and design professionals and the dizzying pace of competition among enterprise-level marketers. In an interview with Beet.TV at the Cannes advertising festival, he describes its remit as “Business design in the broadest context. New models, new products, new ways of expressing them, new ways of building front end access to them.”

For the Raptors, IBM iX replaced a legacy system for handling drafts and players with a touch table-based engagement mechanism for storing player information. It can be accessed from multiple locations and swiped onto screens for group viewing. Not only were player statistics involved but also “the way in which that player participates with social media for example, and in some cases using Watson to analyze that social media engagement the kind of personality that player represents,” Schwartz says.

To help a beverage client in Asia optimize its distribution based on weather, IBM iX tapped the Weather Company assets that IBM acquired and determined that a “single degree of change in the weather can have a dramatic impact on the amount sold, where it’s sold and what is sold,” says Schwartz.

What are the implications for iX competitors?

“Agencies and consulting companies are going to have to react to that because it’s not as simple as ‘I’m just going to build a bunch of front end stuff and hope for the best on the back end,’” Schwartz says. “It just doesn’t work that way anymore.”