WatchESPN: Get Ready For ‘Live Moments’ On All Viewing Devices 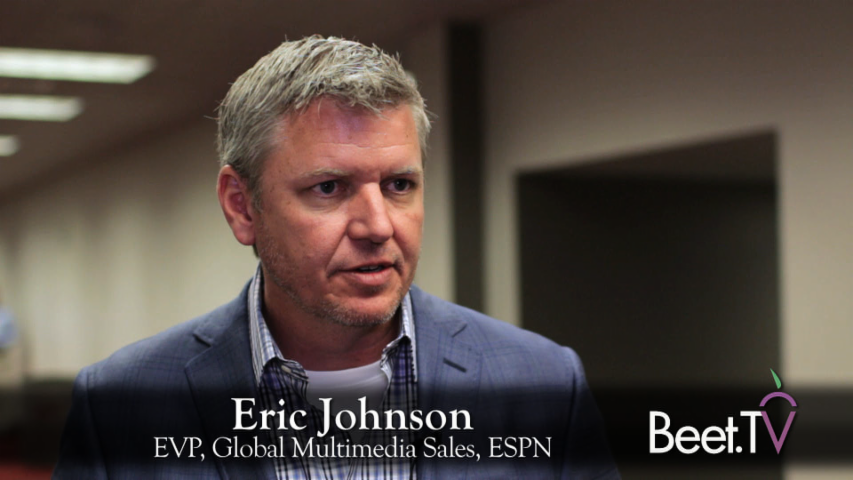 LAS VEGAS – Brand marketers should spend more time trying to figure out how to engage with consumers as they are viewing live sports events than they do thinking about which devices are providing the viewing experience.

This has been one of the takeways for WatchESPN, which offers all of the live, streaming services of ESPN in addition to some 5,000 other live events. In an interview with Beet.TV, Eric Johnson, EVP of Global Multimedia Sales for ESPN, says that the consumption patterns of WatchESPN across devices is “very consistent” with how people watch it on television screens.

“That was a linear insight, that the behaviors matter more than the device matters when you’re watching a live event,” Johnson says.

The media company’s over-the-top viewing has doubled year over year, and with a product like Sports Center on Watch ESPN, more than half of consumption is happening on a linear television screen. “So is that a digital experience or is that a television experience? The answer is yes,” says Johnson.

In the same way that Google has its Micro Moments for reaching consumers online, the sports world has an ever-expanding array of live events during which brands can target people with engaging ads—but only if brands plan ahead.

Digital ad insertion, which is the ability to quickly serve ads that once were deeply baked into media plans, has served WatchESPN well, according to Johnson. From a pricing standpoint, he sees “a lot more consistency in the space in terms of what demo-targeted live CCM around premium product, is and what’s happening in the digital space.”

Johnson was interviewed at the 2016 NAB Show.

We interviewed him as part of our series on the need for standards around premium video advertising. The series was produced around the NAB Digital Summit in Las Vegas. This series on Beet.TV is sponsored by the NAB.