Everyone Wants A Stake In Over-The-Top Viewing: Brightcove 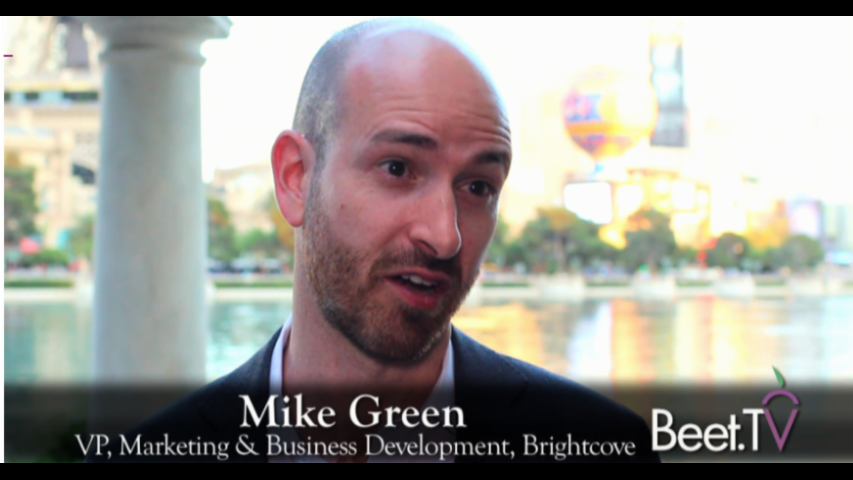 LAS VEGAS – Virtual reality and 360-degree videos might be the sexy new things, but Brightcove is happy to keep pace with the needs of over-the-top (OTT) streaming video services—some three dozen of which launched in the last year.

Brightcove used the occasion of the 2016 NAB Show to showcase its cloud transcoding for Ultra High-Definition (UHD) video through Zencoder and its new turnkey OTT offering. Staying ahead of consumer whims evokes barnyard comparisons for Mike Green, VP of Marketing & Business Development for the video cloud services provider.

“What’s interesting there is increasingly everyone’s buying TV’s that are 4K ready,” says Green. “It’s kind of the chicken and egg game about like is the full ecosystem there for 4K or any new solution to take off. We don’t want to be the laggard.”

On ever-fancier TV screens, the high dynamic range as a component of UHD is the part that people find most interesting, particularly deeper and darker shades of blacks, according to Green. This requires flexibility when it comes to methods of exacting the required compression, including HEVC and VP9 video codecs, which are supported by Brightcove’s new UHD features.

Despite the hoopla over virtual reality and 360-degree video, Green says lots of customers just want to become OTT-proficient. Its new OTT Flow offering, a turnkey solution with front-end partner Accedo, cuts the time for market entry from months to weeks.

“The playing field so much more wide open nowadays,” Green says. “People want to have a stake in that game.”

Beet.TV interviewed Green as part of our series on the need for standards around premium video advertising. The series was produced around the NAB Digital Summit in Las Vegas. This series on Beet.TV is sponsored by the NAB.