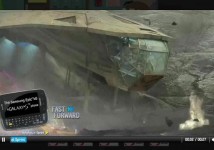 Like them or not, online videos with pre-roll ads can't be stopped, fast forwarded or skipped.  At least until now when MTV debuted an ad for Samsung which can be, well,  fast forwarded.

In clever piece of technology, the Los Angeles-based software firm Panache created an ad solution which allows visitors to fast forward, sort of.

Although the ad goes much faster, the images and super fast sound track provide the commercial message.

We have cut some of the ad into this inteview segment.

We spoke with Panache CEO Steve Robinson about the new format and how it actively engages viewers.

Panache is creating a number of innovative online video ad solutions for publishers including most of the big broadcasters — CBS, MSNBC and Fox.

The company has been working closely with MTV for nearly two years.

The company has just announced that all its ad formats now work with HTML5.