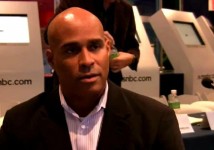 Online video ad network YuMe is generating engagement rates that are as much as
three to four times higher or custom spots than for pre-rolls.
That's what YuMe's CEO Michael Mathieu told Beet.TV during a recent
interview in New York.

The company served up more than three billion video ads through the
third quarter of this year and custom spots are generating as high as a
5% click-through rate, or engagement rate.

That compares to pre-rolls, which
generate a bit higher than one percent interaction, YuMe found. On average the engagement for
customized spots is double a pre-roll. However, pre-rolls are still the dominant ad format in online video and account for 95% of the ads YuMe delivers. Some of the clients YuMe has served up
tailored ads for include Axe, Dove, Vitamin Water, Universal Pictures, and LandRover. The
company recently released a study detailing click-through rates for
various types of video ads.

"We can customize so the ad envelopes the whole screen and you're not
just watching within the player," he said. "We see up to 5% click
yields when people really take the time to develop creative that is
online-specific and have the opportunity to engage the audience versus
taking a TV ad and sticking it in front of the content."

Because of the success with tailored ads, YuMe is exploring additional
types of online video ad formats such as embedding ad units in the
video. "If someone is watching Beet.TV there might be a white space to
the right of you and there could be an ad there selling a product. We
will see more embeddable ads within video that is contextually relevant
and focuses on the user. Ads around the video player will start to
disappear," he said.

Disclaimer:  YuMe was the sponsor of the Beet.TV Online Video Roundtable.

By Daisy Whitney on November 2, 2009 @daisywhitney