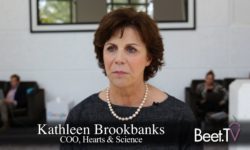 After several years of an arms-race in advertising’s technology super-powers, it has become fashionable for ad-tech advocates to profess a pivot to the more creative art of the craft.

But what does that look like in practice? To the North America MD of IPG Mediabrand’s ad-tech unit, data and creativity are not two separate worlds – they are just two hemispheres of the same planet.

In this video interview with Beet.TV, Cadreon Erica Schmidt says the company has been leveraging the principles and the basics programmatic, applying them to the entire digital suite of investment that an advertiser has, to ensure all of its digital activities sit under the management of one singular lens.

It’s that – the ability of an agency to use programmatic to insert itself as a broad-based foundation under a wider range of client activities – which powers the refocus on creative.

“When you have all that under one umbrella or house … we’re now starting to move much more upstream and influencing … not just the media strategy but also the creative strategy,” Schmidt says.

“A lot of the work that (IPG) Mediabrands is doing in terms of the underpinning of data and technology infrastructure means that we are going to be speaking from the same ‘OS’ (operating system) with our sister creative agencies, which means that we’re moving upstream and influencing the creative storytelling on the basis of data.

“Now, we know that creators don’t love data when they come up with their brilliant ideas, but we’re helping move that. And what it means is, the results are 10 to 50 times better than they were without that piece of the pie.”

We’re saying there is an opportunity because we know more than demography and because we know behavioral patterns. What we could then do is segment out so that you can create different types of creatives that’s just based on large audience clusters.