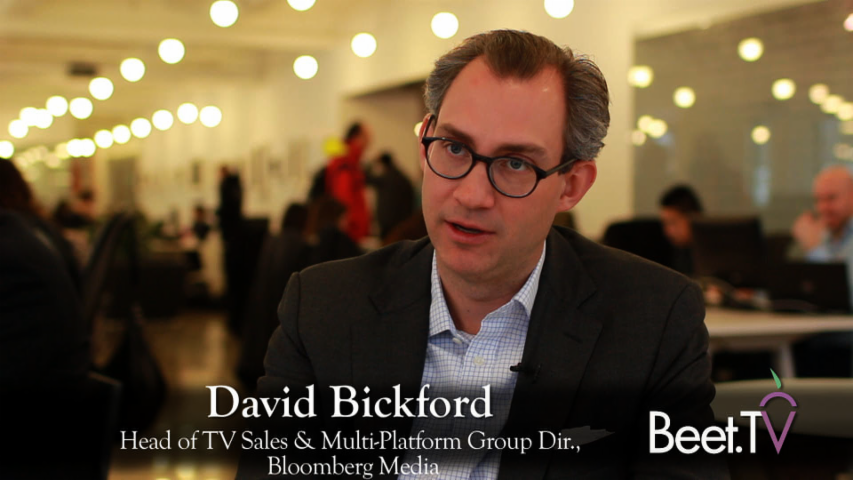 True cross-platform digital video advertising deals can emerge only when agencies change the way they now plan and buy content for their clients, according to Bloomberg Media’s David Bickford.

“If you buy a spot on TV you are trafficking that spot,” Bickford says in a recent interview with Beet.TV. “But a digital video purchase is out of a completely different team and frequently out of a different agency who may not even talk to the TV buying team. The way the buying process occurs has to change in order for a true cross-platform video deal to get in place.”

Bickford, who is the company’s Head of TV Sales & Multi-Platform Group Director, notes that agency higher-ups want their teams to buy content rather than platforms. “And we want to sell that way too,” he says, “but until the structure is in place to make that purchase at one point, we’re still going to be held behind.”

As a content provider, Bloomberg is focused on distributing content, plus selling and packaging and partnering on content. It’s not focused on TV, print and digital.

“We would like the buying to happen the same way. You have a video team and then you have an audio team and a rating team,” Bickford says.

The notion of TV inventory being sold “programmatically” meets a skeptic in Bickford, who believes the industry “basically took a digital term and applied it to television.” Bickford’s background includes stints at CNBC, NBC and Turner.

For TV to truly be considered a programmatic medium the TV networks would have to less protective of their assets and come together “and figure out how we’re going to position video going forward. Not what we own but how as industry we move forward in order to sell the content,” Bickford says.

This video was produced as part of a series on the need for standardization of premium video advertising. The series sponsor is the NAB. For more videos from the series, please visit this page.