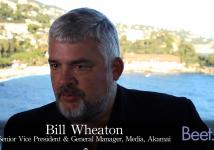 MONACO — The presidential election was a milestone for video streaming, with a three to four times greater volume of streaming at peak than the 2008 election, Bill Wheaton, Senior VP and General Manager, Media Divison at Akamai, tells Beet.TV in an exclusive interview at the Monaco Media Forum. During the election, online video streams peaked at 11 pm ET when President Barack Obama was elected for a second term, with traffic growth coming in part because of more consumer use of smartphones, tablets and PCs than four years ago.

“It’s a combination of the number of connected devices…but the other thing that drives up the comsumption of video by the end user is the adoption of adaptive bit rate streaming,” he tells us. With adaptive bit rate streaming, Akamai can adjust the bit rate based on the connection each user has to the Internet at the time. Bit rates have risen 50% to 60% per end user over the last few years as this technology has grown in usage, he adds. Better bit rates drive up time spent with video, and engagement with the video, because of a higher quality viewing experience.

The Olympics were also a watershed moment for online video. The quality in bit rate rose by 50% for the Olympics programming compared to the World Cup two years before, Wheaton says. He adds that Akamai delivered almost 10 million hours of viewing time for the Olympics, working with more than 23 broadcasters in more than 60 countries.