AOL is Building a “Video Exchange” with Brightcove, Kaltura 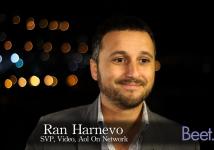 MONACO – With its just-announced integration with the big online video platform Kaltura, and its existing relationship with Brightcove, AOL is building a sort of "video exchange" explains Ran Harnevo, SVP for Video at AOL, in this interview with Beet.TV

In addition to plans to bring more video companies into the "exchange," he says that AOL will introduce a free, self-service function for publishers to access video from the platform.

We spoke at the Monaco Media Forum where he was a speaker.