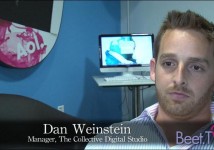 In a big crossover of a Web original to cable television programming, the "Annoying Orange" will be appearing on the Cartoon Network, according to a report in The New York Times.

The growth of the Annoying Orange brand was built by The Collective, a management company for Web creators.

In September in Hollywood, we spoke with Dan Weinsten, Manager of The Collective, about the opportunities for Web video. We have republished that interview today.