As Many U.S. Newspapers Retrench from Online Video, New Opportunities Should Not Be Missed, The AP’s Kevin Roach 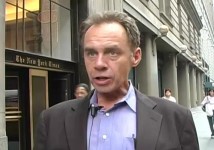 WASHINGTON – Touted just three or four years ago as a promising editorial and business opportunity for newspapers to compete with local television stations and to grab new visitors and revenue streams, a large number of newspapers are cutting back on video and laying off video journalists, according to a study of 100 U.S. newspapers undertaken by the Associated Press.

The internal study was directed by Kevin Roach, Director of U.S. Broadcast News.

In this video interview, Roach says that many papers are cutting back primarily for financial reasons.  He declined to share the specific findings of the study.

As papers have been impacted by the economic downturn and business fundamentals, it has been the video operations which have been among the first to be cut.

Roach says that video should remain part of the editorial mix at newspapers. He sees a big opportunity which is emerging with social media and new devices, notabably tablets.

For video to be effective, he suggests papers publish breaking news of local interest and get it up quickly.   In the realtime web, powered by social media, getting news up quickly is essential, he explains.

We interivewed him at the Associated Press Washington bureau last week.   On Tuesday, he was a panelist at the Beet.TV Online Video Journalism Summit.

Not all papers are cutting back.  One of the most ambitious and successful is the Miami Herald, as Mallary Jean Tenore wrote last week on Poynter.