Verizon Wireless has “One Kick-Ass Router” 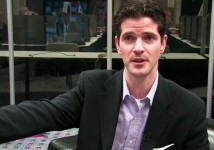 Earlier this month, Verizon introduced the Mi-Fi service, which allows for up to five Wi-Fi connections from pretty much anywhere the carrier has 3G coverage.

The speeds average between 700 Kbps and 1.4 MBps, divided by the number of devices connected at any given time.

Earlier this week at D: All Things Digital, the tech conference sponsored by the Wall Street Journal, Andy caught up with Verizon spokesperson John  H. Johnson for a chat about the new product.

By Daisy Whitney on May 31, 2009 @daisywhitney
Tweets by Beet_TV