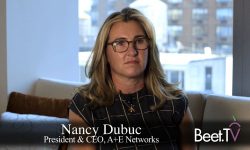 When mobile devices emerged as platforms for video viewing, there was a steep learning curve for ad buyers. Fast forward to over-the-top viewing on big-screen television sets and it’s déjà vu all over again.

There’s no denying the trend of OTT viewing in the living room environment. As FreeWheel reported earlier this week in its release of new OTT research, FreeWheel Signature Insights: The Power of OTT: Audiences & Experiences, this category of viewers complete 98 percent of all video ads. Further, approximately 36 percent of OTT viewership is comprised of viewing that lasts at least an hour.

To FreeWheel’s Herve Brunet, the screen in the living room is “a screen you want to be on. That’s the king screen really,” he says in this interview with Beet.TV.

Brunet, who is General Manager, Markets, at FreeWheel recommends that all publishers have more than one app on an OTT device. “It’s the most immersive experience one can get. That’s way it’s very important for all publishers to embark on the OTT journey.”

At its annual Client Summit this month in New York City, FreeWheel endeavored to educate the buy-side on the ins and outs of OTT, much the same as when mobile began to emerge.

“I think the buy side understands the merit of OTT, but they don’t really know how to execute on it. It’s getting there. It’s improving by the day,” says Brunet, whose business unit at FreeWheel handles both linear TV and online video.

While some technical issues also need to be addressed, viewability isn’t an issue when it comes to OTT.

“You don’t need to track viewability because it’s baked in. It is 100 percent viewable. Everybody knows it. It sits in the living room.”

Looking back a year ago, Brunet recalls the industry dealing with the “murky waters” of fraud issues but now believes “the market has changed dramatically. Now the market is very clear about wanting to go premium, and by premium we mean professionally produced content.

This interview was recorded in Manhattan as part of the Comcast/FreeWheel 2017 U.S. Client Summit “Unifying The New TV Ecosystem.” This series of videos from the summit is presented by FreeWheel.