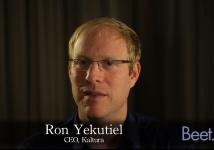 “Kaltura is the first and only open source video platform,” says CEO Ron Yekutiel. In an interview at the recent Beet.TV executive retreat, Yekutiel spoke with us about Kaltura’s structure and the benefits of open source video.

Yekutiel explains, “When we started the company we were looking at other vendors in the industry and they were offering closed, proprietary solutions. We felt there was a big benefit of providing an open environment in order to allow for the flexibility and for the inter-openness between different offerings that are in the marketplace—kind of a glue to put together a fragmented industry with a lot of different offerings around engagement, analytics and monetization.”

Today Kaltura has an open source community of more than 50,000 developers around the world and has been downloaded by over 250,000 corporations, media outlets and educational institutions. Yekutiel explains that the Kaltura platform appeals to developers, institutions and corporations because it enables them to “break the divide between build and buy, and they feel as if they own it and…[have the] flexibility to enhance, extend, integrate and customize in areas that they otherwise would not be able to.”

Yekutiel says knowing that you have “a code that you can control…and that you can take that piece of code and build it and extend it and enhance it is something that’s very powerful.”

In the video interview, Yekutiel also talks about Kaltura’s marketplace for third-party integrations and plugins, a platform through which more than 100 companies are earning revenue today.