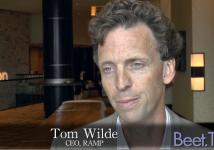 BOSTON — The presence of tags and transcripts in and accompanying video on the Web can drive engagement rates by anywhere from 40% to 300%, says Tom Wilde, CEO of content optimization platform RAMP. Beet.TV caught up with Wilde for a discussion of the growth of metadata in video and how it’s driving ad opportunities.

In addition to engagement rates, rich metadata can also help with more refined ad targeting, he explains in this video interview. He expects more growth in the availability of metadata in video due to the pending September deadline requiring IP-delivered video to include the same amount of closed captioning as TV, as mandated by Congress in the 21st Century Communications and Video Visiblity Act.

RAMP works with broadcasters like the NFL, PBS and Fox to facilitate site search, topic publishing and contextual video publishing using metadata, Wilde tells Beet.TV. The company became cash flow positive in the fourth quarter of 2011, and has renewed 90% of its customers each year for the last three years, he adds.

We spoke to Wilde at the recent Brightcove global customer conference.

By Daisy Whitney on July 12, 2012 @daisywhitney
Tweets by Beet_TV