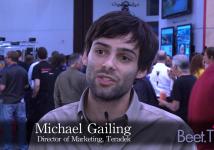 LAS VEGAS – Teradek, leader in wireless HD video encoding technology, introduced their new Cube camera-top HD video encoder this week at NAB.  In this video, Teradek’s Director of Marketing, Michael Gailing, gives us a closer look at some of the features of the new Cube.

"The cube is just a wireless video encoder," says Gailing.  He explains that the new version is just an extension on previous models.  "Predominantly it’s been hardware refinements."  One of the biggest refinements is the new OLED screen, which Gailing explains, "will basically give you the ability to access all of the great features of the Cube at your fingertips.  No longer are you going to have to use an iPad or a computer to get into it."  They’ve also added MIMO WiFi technology and, according to Enhanced Online News, a built-in rechargeable battery.

Gailing also talks about the Cube’s integration with Livestream.  "We’ve integrated their log-in credentials directly into the Cube firmware, so you can literally plug in your username, your channel and your password, and hit ‘Go Live’ and you’re ready to broadcast in under three minutes flat."