The Trouble with Video Apps; They are Not Indexed or Searchable 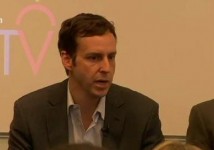 While many publishers have been building video Apps in response to the dramatic rise of video consumption via the iPad, iPhone and Android, it's not a very effective environment for discovery, according Ross Rubin, top technology analyst at the NPD Group.

He notes that there is no content index of video Apps at the present time.

His comments were echoed by Bloomberg global web chief Kevin Krim who says that search optimization around their 13,000 video clips is essential.  While having loyal viewership of videos on an App is "home run" — he prefers "hitting singles" with incremental discovery via search and referrel.

This session of the Beet.TV Video Strategy Summit was moderated by TechCrunch co-editor Erick Schonfeld. Here's his take on this session up on TechCrunch.