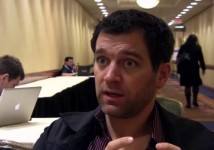 While camera phones and mobile devices have been used by news reporters to shoot and send video for some time,  the BlackBerry has been mostly a communications tool.  With a more sophisticated video camera on later models, this could change.

Kyte, the San Francisco-based online video platform, has launched the ability of customers to upload BlackBerry files directly into the management system for immediate distribution.

Our BlackBerry Tour takes pretty good videos and uploads at reasonable speed via Verizon Wireless.  However, we have noticed that Verizon permits somewhat brief video transmissions, under a minute usually.  It will be interesting to see how Kyte makes video news gathering on the BlackBerry more useful.

Mobile has been a big part of Kyte's strategy from the beginning.  For an overview on the company and initiatives around the Android system, we spoke with founder Daniel Graf earlier this year.  We have republished the interview today.