ShareThis Has Over 1 Million Users, Plans to Monetize Data 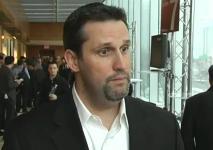 You’ve seen the little green ShareThis widget before: According to comScore the button, which allows users to share news stories, images, and other multimedia across social networks like Facebook, MySpace, and Digg, is seen by 128 million people on the web, CEO Tim Schigel told me at the AlwaysOn conference earlier this month. Over 1 million of those actually use the widget, and that creates a lot of useful data.

“Well we don’t [monetize] yet, but it’s obviously very important data to publishers and to advertisers, because we get to see what people are sharing, what’s interesting to them, regardless of what network you might be on, regardless of the content,” he says.

ShareThis has $21 million in funding, so the fact that it doesn’t make money yet hasn’t hindered its progress. Last week, the company unleashed a beta version of its new button with a simpler design and new functions like contact importing. Use of the button is growing 20 to 30 percent a month, and it is on 80,000 sites from small blogs to big media properties like ABC, The Huffington Post, and MTV. Schigel says the company has plans to make the button embeddable in any Flash player to provide a consistent sharing experience and unified statistics regardless of the media type.

Marshall Kirkpatrick has a story at ReadWriteWeb about the company’s future as a data platform which you can read here.