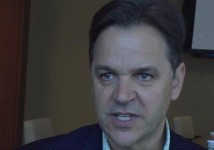 The Rachel Maddow Show enjoys the highest degree of engagement, meaning minutes spent per month, among all the NBC News and MSNBC news programs, according to MSNBC.com president Charles Tillinghast, in this interview with Beet.TV

Part of its success has been from an online/offline strategy, involving high degree of interactivity around Apps and social media, Tillinghast explains in this video.

An MSNBC.com spokeswoman tells Beet.TV: “Online viewers watch over 45 minutes a month of The Rachel Maddow Show video, making it one of the top viewed video sources in the digital NBC News network.”  Her source is the comScore March Video Metrix.

Christian Muche co-founded DMEXCO, one the digital industry’s global tentpole events. He’s moved on.  Now, in partnership with the MMA Global, he is heading the most ambitious new marketing event of the year called “Possible.” The event will take place in Miami Beach at the Fountainebleau April17-19. A number of CMO’s will speak including the […]