Yahoo’s Anna Robertson: Streaming Videos on Facebook is a “Huge Opportunity for Us” 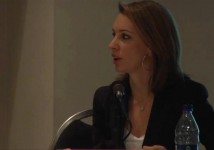 Facebook pages are becoming increasingly video rich and an increasing number of small and large video publishers are streaming more of their videos “in-line,” meaning having their player on Facebook pages, not just providing links.

Says Yahoo’s Anna Robertson, Director of Original Video & Social Media, the opportunities to stream videos on Facebook is a “huge opportunity for us.”

She spoke during the Beet.TV Video Journalism Summit at the Washington Post earlier this month.

Also addressing value of streaming on Facebook was Brightcove SVP Jeff Whatcott who noted that Facebook allows publishers to advertise on their players on Facebook.  (FB only allows certain “white listed” players to be used.)