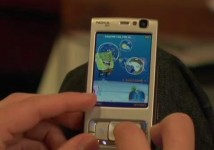 Adobe's Flash 10.1, which has been in Beta on some smart phones since October, will get a big push into the mobile ecosystem next week when Adobe and many industry partners are expected to to announce key partnership at the Mobile World Congress in Barcelona.

While Adobe's thinner application for mobile, Flash Lite, has been deployed on some phones, the deployment of Flash 10.1 means that many of the most sophisticated Flash applications will run on a range of smart phones.  iPhone is excluded as of now.

Last week, I sat down with Adobe's Bill Rusitzky to talk about the emergence of Flash on mobile devices and other Flash-related developments.

I spoke with Bill after his AlwaysOn OnMedia panel moderated by Peter Kafka.

You can see a video demo of Flash 10.1 on a Google phone up on Gizmodo.

Flash will not be on the iPhone nor the iPad — here's a story from the Wall Street Journal about the showdown between Apple and Adobe.