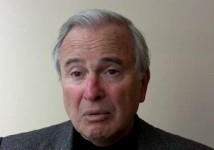 YouTube, which was expected to lose $500 million in 2009, probably lost only $200 million last year, helped by a successful advertising strategy, says Ken Auletta who reported these numbers in his best-selling book "Googled: The End of the World as We Know It."

Yesterday I sat down with Auletta in his offices at The New Yorker to chat about Google,YouTube, and the future of digital media.

He expects that YouTube will implement a pay-per-view scheme for select premium content.  He sees the inevitable rise this year of paid models for a range of digital media.

In other YouTube news today, a Barclay's analyst says that YouTube will turn a profit this year, Peter Kafka reports on MediaMemo.

Our Series with Ken Auletta

This is the second in a series of interviews we have published with Auletta.  Yesterday, we published his perspective on the Google showdown with China and the role of co-founder Sergey Brin.   More to come.

Update 1/20:  YouTube has just announced it will be charging for some videos made by independent filmmakers.

Note:  We had some really unfortunate noise in the audio for these interviews.  Our apologies.