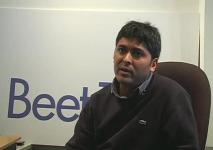 By letting consumers personalize the ads they watch, marketers have increased the click through rates by 50% to 100% on some online campaigns.

That’s what Naj Kidwai, the CEO of online video technology firm Real Time Content said during an interview with Beet.TV in New York.

The company’s tools let users personalize the ads they see based on profile information from an ad server network or behavioral targeting network, for instance. Essentially, that means each customer could be seeing a unique ad. A Real Time client in the United Kingdom doubled its sales of insurance policies using the ad technology, he said.

The early results are impressive and they also align with data cable operators are realizing too when they serve up more targeted and addressable ads to viewers. As an example, Comcast has said customers are 38% less likely to tune away when an addressable ad is delivered.

In general, targeted ads on TV garner a 7% click through rate, meaning consumers click on the ads using the remote 7% of the time, which is much higher than the typical 1% or less response rate with direct response ads, according to database company Acxiom.

The big question is whether these results for Real Time Content (RTC) and other more personalized ad firms will hold up as more advertisers use personalization. But early data is promising.

The company is jointly funded by BT, British Telecom and New Ventures Partners.

You can also find Daisy's columns for Beet.TV on the Huffington Post

By Daisy Whitney on May 13, 2009 @daisywhitney
Tweets by Beet_TV