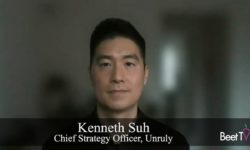 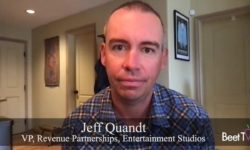 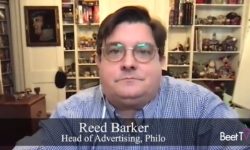 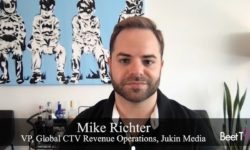 When it comes to the new ad opportunities presented by connected TV, the execution types are broad.

But companies that want to make a splash on the new screen can start with one simple addition.

That is according to one woman whose team is helping brands convert their ad creatives for CTV.

“You can do more with your creative,” says Gaby Maestre, Sr. Director, Tr.ly Creative Solutions, Tremor Video, in this video interview with Beet.TV.

But Maestre says brands can start in a simple place: “Put QR codes on your CTV.

“A lot of people don’t agree with us that QR codes should be everywhere if you’re running a CTV ad.

“The benefits outweigh any type of predisposition you might have. With a QR code, there’s always intention behind it. There’s never an accidental scan on a QR code. You’re bound to take advantage of some brand lift.”

Started in Japan in the mid-nineties, QR code were initially popular with the country’s NTT DoCoMo mobile carrier. They never quite took off until they were baked into the cameras of iOS and Android.

Recently, however, practices like contactless ordering from restaurant menus have seen QR codes become even more popular, and a clutch of companies has been trying to embed them in TV shows, wherein they can be used to hot-link to brand websites and ecommerce stores.

“As a best practise, make sure that the QR code is visible throughout the ad from start to finish,” Maestre advizes. “Consumers are already second-screening. They already have that device in hand, literally to scan.

“The fact that they could be spending more time after your 30 second spot with your brand while a competitor’s ad is running, you can’t really put a price point on that.”

Maestre’s Tr.ly does a lot more than QR. The outfit was launched almost a year ago by Tremor International’s Unruly and Tremor Video units as a bespoke creative studio, offering video creation, optimization and optimization for emotional resonance.

Tr.ly is helping brands including those that are commissioning their first video ads and those that were already buying display media but need to adapt to CTV screens.

Maestre says a common need is to convert from creative produced for 16:9 screens.

“We essentially act as not just a creative production group, but also solutions based consulting group for media buyers, as well as brands,” she says.

And brands have every reason to embrace CTV with more than just shovelware but, rather, with something customized for the platform.

CTV is widely considered to combine the qualities of high-impact , large-screen creative with digital targeting and analytics.

Maestre says auto, retail, CPG and travel companies are bouncing back to advertising through CTV,

“Now that you know, who you’re serving to, or who you’re targeting, where they are, what time of day, so on and so forth, you can then dynamically modify that creative,” she says.

You are watching “Unlocking the Potential of CTV/OTT for Advertisers & Publishers,” a Beet.TV leadership series presented by Unruly. For more videos, please visit this page.

By Robert Andrews on January 12, 2022 @robertandrews
Tweets by Beet_TV