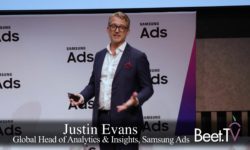 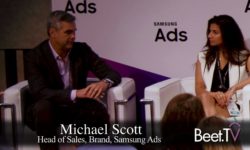 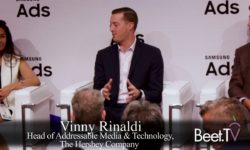 Today, subscription video has boomed, but the following wave of advertiser-supported VOD services is also emerging in its wake.

Preparing for an internet TV world that won’t only be about subscription, brands and technology providers convened on a panel at Advertising Week New York, moderated by eMarketer analyst Nicole Perrin, to discuss measurability, effectiveness and the future of creativity.

“We have actually what’s called the PepsiCo Rating Point system, it’s called PRPs. We take purchase data layered on with social data, emotional data, and then we really create our own propensity model to rank now against our buyers of Doritos or Quaker or Pepsi, blue can, who’s most likely to watch which network and which show, and then we utilize that for upfront buying.”

“Even though we’re seeing a higher cost to buy against this media, I’d rather control reach frequency because I’m actually getting a lower cost per person by doing that, even though the CPMs may seem inflated and all that. But because the planning capabilities in the entire industry are so nascent right now, how do we evolve that game?”

“(The industry is) starting to bring together media and creative and using a platform in data to do dynamic creative optimization and putting it back together. I’m old enough to (remember) when it was together and then when it got pulled apart. Being part of that inevitable change in the industry is probably what I’m most excited about for next year.”

“I’m so excited about our Samsung TV Plus, which is a free television service that has upwards of almost 70 channels that comes a free TV with your TV. As soon as you get that smart TV, that brand new 65-inch, and you plug it in and you turn on the internet, you start having great high quality television served right to your home. So it helps compliment those cord cutters who maybe were using kind of the cable for channel surfing.”

This video was produced at the Samsung Ads Leadership Forum during Advertising Week, 2019. It is sponsored by Samsung Ads. For more videos from the event, please visit this page.