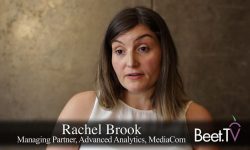 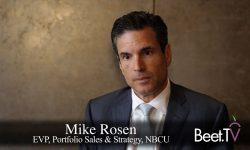 If bigger is better for companies like Charter Communications and Time Warner Cable, it’s also a boon to cross-platform measurement providers like comScore. Often overlooked by headlines heralding the continued merging of cable providers are the gains made in tracking consumer behavior and the ability to match it with product and service consumption—benefitting both programmers and advertisers.

So it was when Charter scooped up Time Warner Cable (now Spectrum) just over a year ago. Since then, renegotiation of comScore’s agreement with Charter brought comScore from 22 million measured households to more than 35 million, according to Jeff Boehme, SVP, Television Research at comScore.

The bottom line: comScore ended up with about 75 million reportable television sets in use, giving the company greater insight into tuning behavior, Boehme explains in this interview with Beet.TV.

Between its own data warehousing and relationships with companies like Experian, comScore can identify programs with high propensity of certain advertiser audience segments and match it to advertising campaigns in those programs.

“Now we can provide much more detail on the accountability of advertising, both in television as well as digital,” Boehme says.

comScore also has been on the ground floor of addressable TV advertising, given its own roots as well as those of Rentrak, with which it merged in early 2016. Early addressable players like DIRECTV and DISH relied on comScore and Rentrak to provide measurement capabilities.

One casualty of advanced audience measurement and correlation with consumer purchasers is waste, which has been a given throughout the history of TV advertising.

“Television now becomes more accountable because now what they can do is plan more effectively and deliver their segments with higher efficiencies,” Boehme says. “So no longer do we have waste factors that are standard among media buys.”

For programmers, the gains are mainly in the ability to better manage their portfolios “so the programmer understands what audiences now identified as consumers they need to attract and how.”

We interviewed Boehme at the Cynopsis Measurement and Data Summit in New York earlier this month.