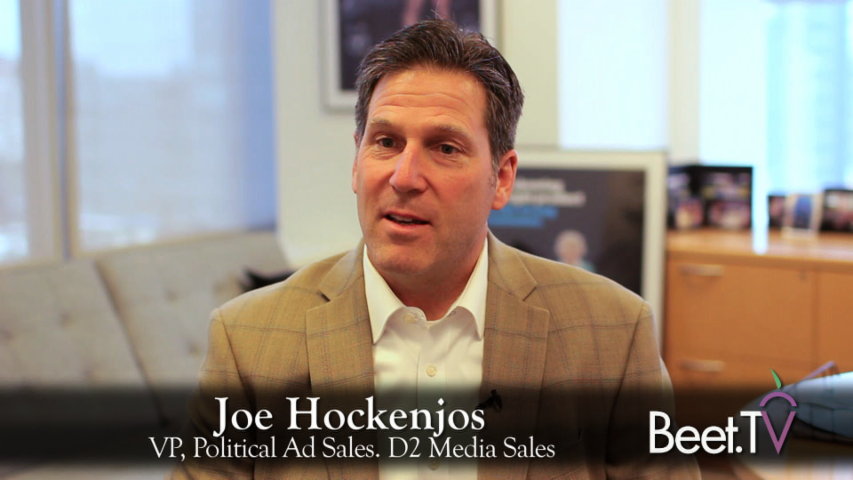 Who would have thought that something so 1990’s as the digital video recorder (DVR) would help to transform political advertising?

In the first presidential election to benefit from the granular targeting capabilities of addressable TV advertising, the joint venture between DISH and AT&T-owned DirecTV is helping political campaigns target more than 20 million households at the state and national level. Called D2 Media Sales and founded in 2014, the entity offers precision and scale that was heretofore unavailable.

“You’re either buying local broadcast stations on a DMA basis or you’re buying cable interconnects in the same way,” says Joe Hockenjos, VP of Political Ad Sales at D2 Media Sales, in an interview with Beet.TV. “When you piece those together to complete a state you find that you’re buying a lot of waste, because a lot of those homes in the DMA’s will fall outside of the state that you’re primarily interested in.”

Enter the lowly DVR, informed by AT&T, DISH and DirecTV subscriber data, along with voter registration information and data from such third-party providers as TargetSmart and i360. Once a campaign selects a target audience, D2 delivers specific television commercials to that household during a commercial break when they are watching TV via a DVR.

How does D2 gauge results derived from addressable campaign ads?

“In terms of determining the value, because it’s a zero-waste product, they know that they’re getting into just those homes that have a great propensity to vote and to vote their way,” Hockenjos says. “You compare it to the other choices in the television marketplace and you see this as a superior way to get your message across.”

D2 hopes that the success of political campaigns will help to bolster commercial marketers’ embrace of addressable advertising, “just as we’ve done on the commercial side with different verticals like financial services, automotive and pharmaceuticals.”