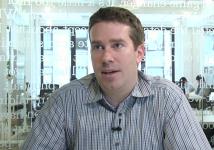 Beet.TV spoke to TubeMogul’s Keith Eadie, VP of Marketing, for insight into how the new capabilities can be used by marketers.

Digital advertising has always been good at tracking precise metrics such as completed views with video ads, but most brands turn to online video for brand-building and thus want different metrics, explains Eadie in this video interview. In most cases, they rely on post-campaign surveys to study brand lift from video ads.

The TubeMogul BrandSights tool lets marketers set up brand surveys from the get-go when they launch their campaigns, he says.

As an example, a marketer could build out a survey when a campaign begins, and TubeMogul’s platform will serve up a retargeted display ad later in the same week to a viewer who had already seen the video ad. The banner ad would ask the viewer survey questions about brand awareness and perception, and then compare the answers to those of viewers who didn’t see the ad, for instance, Eadie tells Beet.TV. The survey questions can be targeted by audience, geography, Web site and more, he says. Eadie adds that a movie studio tested the tool and learned that intent to see one of its films wasn’t high in New York, so the studio was able to tweak is marketing in that area before the release.

By Daisy Whitney on September 10, 2012 @daisywhitney
Tweets by Beet_TV