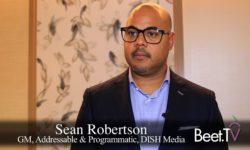 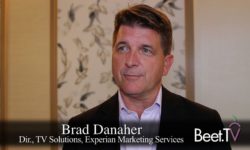 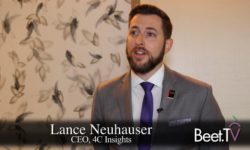 Programmatic ad spending in television is still forecast to be a modest 4% next year – but initiatives to bring TV and digital video together could move that needle.

In fact, programmatic methods of buying – that is, using data and targeting capabilities to buy individual audiences, not groups of viewers against whole shows – could help turn around linear TV ad spend that is itself now declining.

So what place does over-the-top (OTT) have in this emerging landscape?

“It’s the marriage of two big pieces of the advertising ecosystem,” says Senior Vice President of DISH Media Kevin Arrix in this video interview with Beet.TV. He was interviewed during NYC Advertising Week.

“On one side, you have digital capabilities. You have targeting, measurement, execution. And then on the other side, you have top of the pyramid video supply.

“So OTT brings with you the quality supply that the market needs where there isn’t enough supply to be quite honest in that lane, and it also allows you to put very detailed target against it, buy it programmatically or buy it managed services. It’s really the connection point to legacy linear television.”

DISH has put programmatic and addressable together for buying contextually or addressably. In May, DISH announced that it had partnered with SpotX to create addressable data segments representing anonymous viewers of Sling TV.

The segments involved included would-be-vacationers, auto intenders and back to school shoppers.

“We are seeing incredible demand for programmatic execution,” Arrix adds. “And so for us, our goal was to make sure that we had that connectivity and the execution is very seamless.”