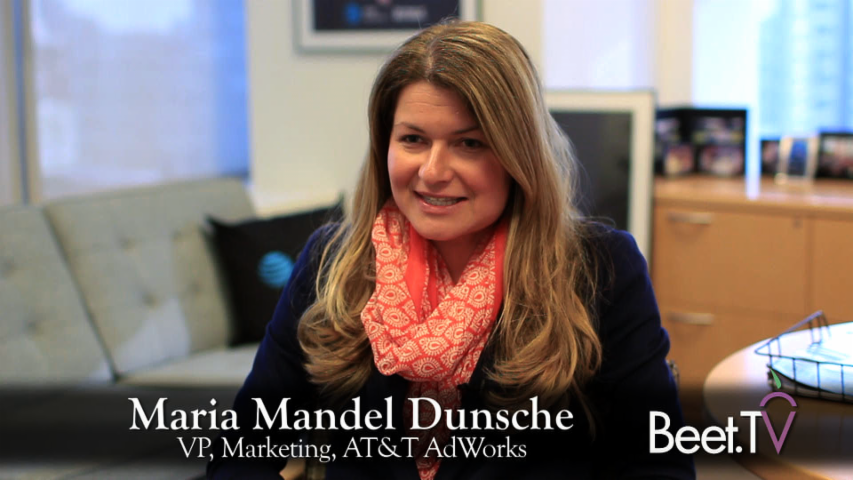 The leader in addressable television advertising, with some 13 million households, AT&T is using a humorous commercial during the TV Upfront negotiating season to sell the power of addressable while speaking to concerns about its cost and scale.

The commercial, “Stop Showing the Right Product to the Wrong Customer,” offers up three vignettes: a grownup in a classroom pitching complicated financial services to kids; a man trying to sell a rugged construction boot to a fashion model; and a showroom salesman pitching a muscle car to seniors.

“It’s based on insights that there’s a lot of waste with traditional TV advertising,” Maria Mandel Dunsche, VP of Marketing at AT&T AdWorks, says in an interview with Beet.TV. “The campaign shows all of the fun mishaps that happen when you may have the right product but you’re reaching the wrong audience.”

The communications giant believes that a lot of advertisers are questioning the value of television advertising.

“Gone are the days when nobody gets fired for putting their ad spend in television,” Mandel Dunsche observes. “Media planners and advertisers want TV to become as accountable as some other channels, such as digital.”

She answers questions about the scale of addressable TV as it now exists by pointing to AT&T’s 13 million households and the estimated 40 million addressable households that will be available to the advertising industry by the end of 2016.

As for cost, addressable is more expensive on a CPM basis because of its more granular targeting. “But you have to look at the effective CPM and not the CPM on the outset,” Mandel Dunsche says. “When you look at the fact that there’s no waste associated with addressable, you’re reaching 100% of your target audience. Thousands of campaign results show addressable can be very efficient way of driving results.”

The company continues to roll out cross-platform (TV to mobile) addressable advertising, an effort that includes last year’s trial with Opera Mediaworks.

A big target for addressable providers is the consumer packaged-goods category. Advertising Age reports that ConAgra has been running addressable TV ads for nearly three years.

We interviewed her as part of our series on addressable and the new world of television advertising. This series on Beet.TV is sponsored by AT&T AdWorks.