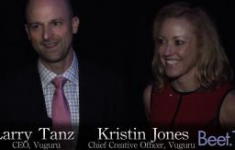 Larry Tanz, CEO of Hollywood television production studio Vuguru, founded by former Disney CEO Michael Eisner in 2006, says that the quality of Web video debuted at this year’s NewFronts has taken a big leap forward. He says the Web original industry is where cable was some years ago when it’s content went on to surpass broadcast television.

Last week at the AOL NewsFronts event, we interview him and Kristin Jones, Chief Creative Officer about the emerging medium and their new shows for both AOL On and on Yahoo.

For more on the NewFronts, read this report in the New York Times by Leslie Kaufman and Tanzina Vega.

Below is Vega’s video report on the NewFronts