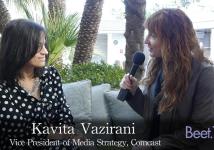 We taped this interview last week at CES.

Editor’s Note: This segment has been produced as part of a series of coverage of CES sponsored by SMG, Starcom MediaVest Group.