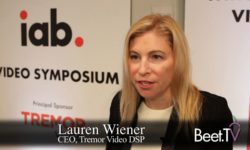 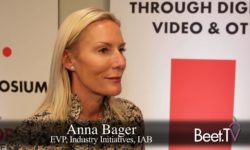 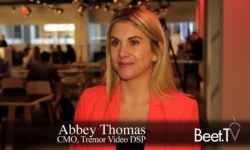 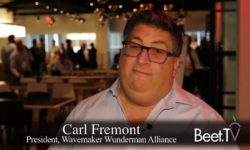 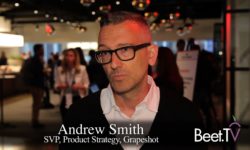 High on the list of priorities is taking advantage of Taptica’s global footprint, Weiner explains in this interview with Beet.TV at the IAB Video Symposium.

“They have offices in 15 different markets and we’re currently planning our global strategy, likely starting with Japan and Korea.”

Both Taptica and Tremor Video DSP are “very focused on using data as a differentiator to make sure that advertisers are connecting with the exact right consumer at the right time,” Weiner adds.

Another benefit to their relationship is that both are 100% focused on the demand side. That Tremor Video DSP also had a big presence on the sell-side was a key reason attributed to its divestiture of its SSP, as AdExchanger reports. The SSP is now called Telaria.

With technology considered by advertisers to be “table stakes,” data is now front and center, according to Weiner.

“Certainly, technology has to be built to optimize to the metrics that they care about most, whether it’s viewability or completions. But really the differentiation is either coming from the data or from the inventory.”

“It allows us to find an advertiser’s marketing plan on TV and retarget them exactly on that same plan on a mobile device, so they can fully own what we call the modern living room,” Weiner says.

Whereas Tremor Video DSP’s DSP used to make all of its buys with its own SSP, the focus now is on diversification.

“We of course are still an important customer of Telaria, but we are looking to work with other video-specific SSP’s, other mobile-specific SSP’s. We’re looking for SSP’s that have global inventory and also ones that have unique inventory that’s specific to certain marketers’ needs, whether it’s liquor-compliant inventory, long-form inventory or other sorts of more scarce inventory,” Weiner says.

This video is part of Beet.TV’s coverage of the IAB Video Symposium 2018 presented by Tremor Video DSP. For more videos from the series, please visit this page.