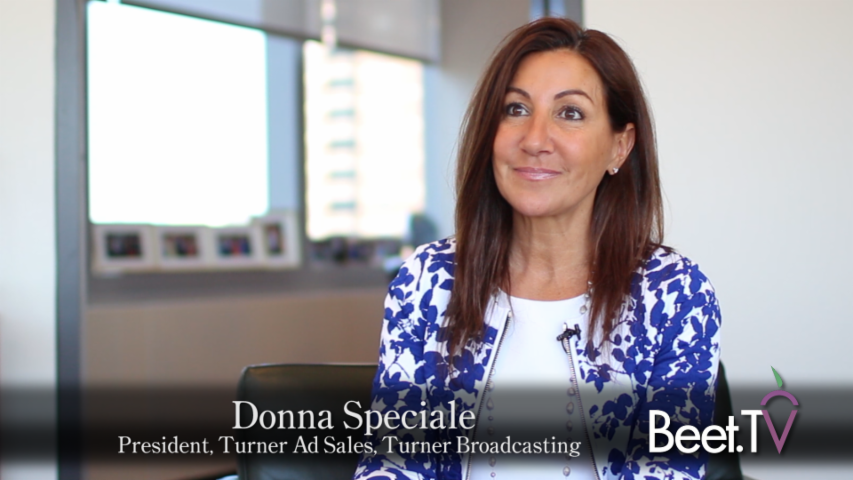 Viewers don’t like too TV many ads. That’s the realization CNN owner Turner has come to, one of several media organizations now responding to negative consumer sentiment about the way content is funded.

Turner’s solution – fewer, longer, better ads. That’s why, in October, it said it will halve the number of prime-time ads on its truTV real-life crime channel, a reduction of up to nine minutes each hour. But now the same idea is also being applied to original series on the TNT channel, which will also halve ad load.

“Our vision starts with having the consumer at the center,” Turner ad sales president Donna Speciale explains in this video interview with Beet.TV. That’s why we started thinking about the ad loads.

“The experience right now on television is not ideal. With all the choices that a consumer with Hulu or Netflix or Amazon or cable or TV or mobile, the experience is now crucial.
We needed to take a step.”

Although these steps have so far been taken in earnest on two of Turner’s channels, don’t bet against seeing ads reduced across the board. Adult Swim on TBS already comes with fewer ads in tow.

Fewer ads in a slot gives Turner the opportunity to sell longer ads to brands at a higher premium, in what is a less cluttered airing, and lends itself better to the kind of extended videos brands are now making as native marketing content. The only question is finding the right balance. That’s why Speciale is running tests.

“We’ve been doing a lot of research on the backend and testing what breaks we should be doing – three breaks with more ads in those breaks, or should we keep it at five breaks with less commercial loads in those,” she says.

“We’re testing on three to five. Our gut is saying five breaks are probably the best, with a two-minute to two-and-a-half-minute load between them.”

This interview is part of our series “The Road to Cannes”, presented by FreeWheel. Please visit this page for additional segments.