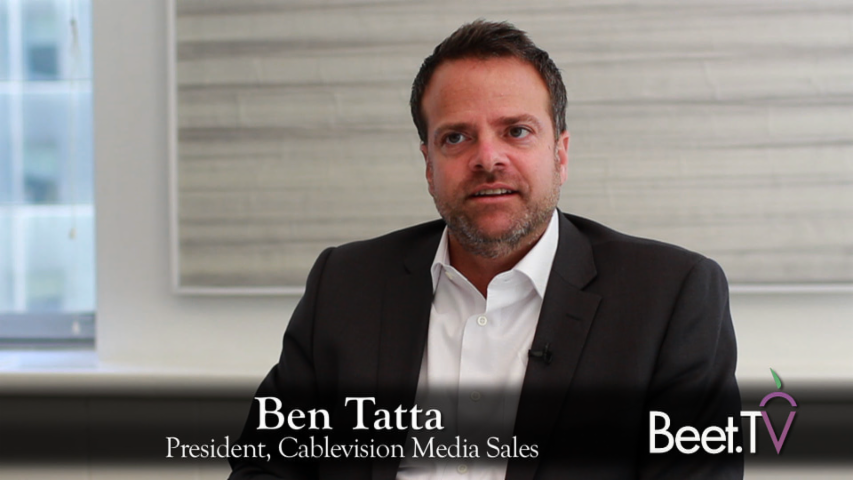 Political campaigns are at the forefront of combining linear and addressable television, with the latter’s frequent messaging changes bringing a whole new tempo to advertising on the medium.

“It’s fascinating that of all the categories we work with, political probably is the most sophisticated in terms of the use of the data,” Ben Tatta, President, Cablevision Media Sales, says tells Beet.TV in this video interview, during a week in which the top Democratic and Republican presidential candidates descended on Manhattan, a prime market for Cablevision and its roughly 3 million customers. Although addressable advertising is more expensive, it’s definitely on the rise in the ongoing election season, Advertising Age reported.

According to Tatta, the choice of TV platform for political campaigns is not an either/or situation, because most are running campaigns simultaneously.

“They will use a traditional linear schedule to get the tonnage and mass message out, and use addressable to drill home very specific, issues-based messages to very specific voting constituents,” Tatta says. “Most of them are using sophisticated techniques to convey a message and those messages change daily based on news cycles.”

The new and interesting dynamic with political addressable is that copy changes in commercials are constant.

“Every couple of days we can be changing out copy. You can fine tune messages based on things that are in the news cycle and deliver it in two days,” Tatta says. “That kind of tempo is somewhat foreign to television, but with addressable we can deliver it.”