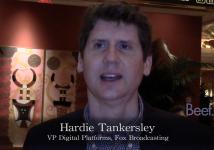 LAS VEGAS — Television viewers’ desire for second screen content is on the rise and Fox has embraced this desire with the launch of FOX NOW, a dedicated second screen experience on iPhone, iPad, Xbox, Samsung Connected TVs, Windows 8 tablets and PCs.  At the 2nd Screen Summit at CES, Hardie Tankersley, VP Digital Platforms at Fox Broadcasting, spoke with us about the launch of this new app and its functionality.

The FOX NOW app currently includes second screen content for six Fox shows every week, incluging New Girl, American Idol, Bones, The Mindy Project and American Dad.  Tankersley explains that this second screen content is "customized content produced for that show, by that show," and includes everything from behind-the-scenes photos and videos to fun interviews, polls and quizzes, Twitter streams and more.  There is also a dedicated app for American Idol, which allows users to vote for their favorite contestants directly through the application.

Tankersley says, "We’re doing lots of different stuff just to see what people are interested in and what we can get engagement with.  It’s just a very early step, but we think there’s opportunity here."