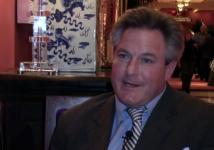 San Francisco-based commerce company Delivery Agent announced a partnership with Samsung as the Consumer Electronics Show in Vegas. We had the opportunity to speak with Delivery Agent SVP Sales & Business Development, Jody Stark, at the at the 2nd Screen Summit at CES to find out more about the partnership.

Stark explains that the partnership brings Deliver Agent’s commerce platform to Samsung’s entire connected TV set for 2013 and beyond. “It allows consumers to buy goods that are contextually relevant to the shows that they’re watching, as well as just to shop in the comfort of their own home while they’re watching TV.”

In the interview, Stark also talks about Delivery Agent’s involvement in the Sons of Anarchy second screen application, which allows viewers to purchase goods that are contextually relevant to what’s going on on screen.