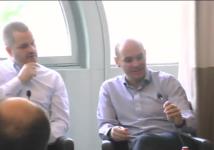 LAS VEGAS — As demand for and usage of second screen apps grows, a shift towards the monetization of these apps can be seen. To this end, Automatic Content Recognition (ACR) platform Civolution has partnered with ad management and distribution platform DG. We had the opportunity to speak with Civolution CEO Alex Terpstra at the 2nd Screen Summit at CES to find out more about the partnership.

Terpstra explains that, “We see a shift now towards monetizing [second screen] platforms with advertisements, with click-throughs, and auto-functionality around advertisements.” He says that the monetization of second screen platforms is “a critical topic for 2013.”

Terpstra says, “With this announcement today with DG we’re taking a big step into the monetization of these platforms by allowing the ability to run synchronized ads in a very simple way.”