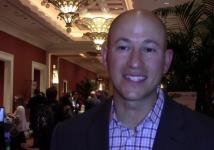 LAS VEGAS – As networks and television content creators strive to reach audiences on a deeper level, the second screen has become an integral part of television broadcast experience. At the 2nd Screen Summit at CES, we had the opportunity to talk with keynote speaker Rob Gelick, Senior Vice President and General Manager at CBS Interactive, about what CBS is working on in the realm of the second screen.

Gelick told us about CBS Connect, an iPad application that the network launched last week to give iPad users the opportunity to engage with CBS shows via a social experience, interact with the actors and actresses and more.

The application also provides a synchronized experience that provides ancillary content. Gelick explains, “That’s really what second screen is all about – it’s about synching to the content.” The synchronized experience on the CBS Connect app, which delivers companion pieces of content, from teasers to backstory, is currently supported by three CBS shows—Hawaii Five-0, NCIS LA, and NCSI. Gelick says, “What it does is allow a much more rich, submerssive experience around the broadcast and it lets our show producers tell a story across platforms.