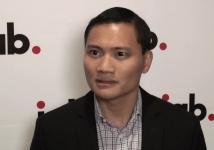 AOL today announced the introduction of apps for the smartphone and tablet, surfacing up some 420,000 videos of AOL-owned properties including HuffPost Live and TechCrunch and many others from syndication partners including the BBC and Martha Stewart.

The device is a unique, "one-stop shop" says video chief Ran Harnevo in a company statement

Earlier this week during Advertising Week in Manhattan, we spoke with AOL's Rob DelaCruz, GM for Connected TV and Moble Video, about the apps

The company has launched versions for both Apple iOS and Android, with customization around the new seven -nch tablets. The Apple app is Airplay-enabled, he says.

Disclosure: Beet.TV is syndicated via AOL and has a commercial arrangement.