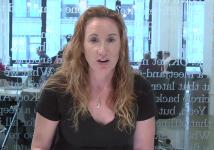 NBC’s ratings for the London 2012 Olympics has passed the 2008 Beijing Games and the broadcaster is finding a surge in last minute advertising at high rates, reports The New York Times.

She says that NBC’s move to profitability is also being helped by the digital distributon of the content where streaming costs are being borne by YouTube.

YouTube is providing the live stream and player to NBC along to 65 other nations as a “branding moment.” Please see our report on YouTube and Olympics.

Ashley Swartz is a principal of the New York-based consultancy Furious Minds. She is former head of the interactive television practice at Digitas. She is a regular contributor to Beet.TV

Note: Ashley said in this segment that the Olympics ad spend was four times the superbowl, she meant to say it was ten times.