London 2012 Olympics Will Reshape the Distribution of Live Sports, Analyst 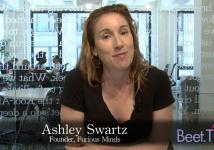 The distribution of live coverage of the London 2012 Olympics on mobile devices, by many broadcasters around the globe, will have a profound impact on the way that sports is consumed — and the very relationship between sports teams, broadcasters, and MSO’s says Ashley Swartz, head of the New York digital consultancy Furious Minds and former lead of the Digitas interactive television unit.

In her comments, Swartz references the expected role of sharing via Shazam, the NBC Olympics app created with Adobe, and the role of YouTube as a content distributor of the Games in a number of countries.

Here is our report about digital distribution in China.

For an idepth look at how the BBC is employing a multi-screen approach, please find our video with the head of BBC Sports which we taped last month in London.

Note: We are pleased that Ashley will be contributing with her on-camera commentary to Beet.TV on a regular basis. AP