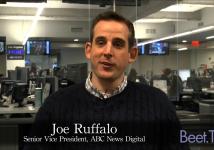 LONDON – While the BBC Worldwide is putting most of its efforts around apps for the Apple iOS platform, apps won’t maintain their dominance in the future, predicts Daniel Heaf, the head of digital for BBC Worldwide in this session from last month’s Beet.TV Global Video Summit – which took place at the BBC Worldwide headquarters.

Heaf says that the closed ecosystem of apps greatly limits discoverability and constrains business opportunities. He sees the emergence of app-like experiences on the Web which will be less costly to create, will work across multiple platforms and will be much easier to find and promote.

Heaf was recently promoted to Chief Digital Officer, a title he will assume in October.

Yesterday we published this segment from our other event in London, one at the Financial Times where Brigthcove’s Jeff Whatcott discusses the value of apps vs. mobile web.