BBC Worldwide Digital Chief: Future Apps Will be Outside the “Stores” 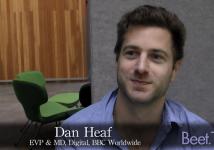 LONDON – Whilst the BBC Worldwide has made a considerable efforts around creating Apps for the Apple iOS and Android platforms, the future of Apps will be more Web-centric, in an HTML5 framework, says Daniel Heaf, MD and EVP for Digital, in this interview with Beet.TV

Heaf explains that among the reasons  Apps will move from the current distribution platforms is a lack of discovery, along with economic issues.

Also in this segment, he explain how the BBC Worldwide has established a large audience in the United States via Netflix and iTunes.

Heath was a speaker at the Beet.TV Video Summit at the BBC Worldwide headquarters last week.

Editor's Note:  Many thanks to Dan Heaf for hosting our conference.   Very much appreciated.  AP