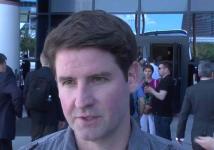 LAS VEGAS — BreakingNews, the influential aggregator of global breaking news, has released the first of its kind App for Samsung smart TV's which pops up news when it happens.

At NAB we spoke with Cory Bergman, General Manager of the MSNBC-owned media start-up.  Bergman says in this interview that BreakNews now has 12 employees in Seattle, New York and London.

Purchased in 2009 as an influential Twitter feed, BreakingNews will be on an increasing number of devices, social networks and Web sites, Bergman tells Beet.TV